Located in South Wing next to Claire's
See Mall Map

Blondie's Cookies has been a part of Markland Mall since September 3, 1985. Blondie's cookies and brownies are baked fresh daily with no artificial flavors or preservatives, so every bite will be as fresh and wholesome as if you baked them yourself.

At Blondie's Cookies, we believe that our customers come first, and our mission is to provide our customers with friendly and efficient service. To produce the highest quality products, to present our stores and staff in a professional manner and to serve our communities. 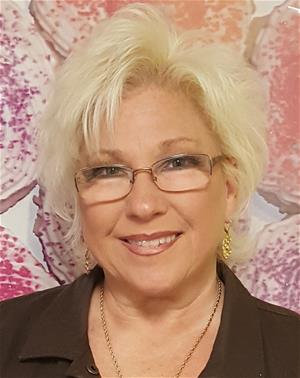 It all began 1979 when I was a KHS Sophomore, when my father was killed in a car accident. I began baking cookies for therapy to cope. I made cookies for my high school prom and teachers. I then fell in love with my high school sweetheart and we married and went off to college together.

We were quite broke in college. To make ends meet, I baked cookies for his fraternity house and sold my cookies to all my husband's fraternity brothers so we could buy groceries. I am still happily married to my high school sweetheart after 39 years.

In college, our little cookie business was called Mrs. C’s Cookie Cabin. Our Junior year of college, I met with the VP of Leasing for the previous owner of Markland Mall, Irv Katz, and a senior leasing rep named Ted Fratrick. They were very reluctant but loved my cookies and my passion and tenacity, so they offered me my first real opportunity to open a store in my home town of Kokomo at our Markland Mall. 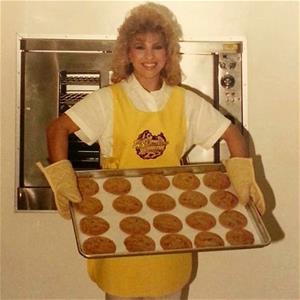 At age 20, my husband and I signed a 10-year lease with our assets consisting of a college degree and a beer can collection and Really Good Cookies.  We hit the ground running and opened 2 more stores the following year.  Over our 37 year history, we have opened 14 stores in Indiana and Florida.  Blondie’s also operates a nation-wide mail order division, a fundraising division, and a wholesale division along with our retail stores.

Over the years, we have seen many ups and downs in the business cycle. We weathered the storm of 9/11, the housing bubble, and now Covid-19.  We had to make decisions to close stores that were low performers and build new ones.  You know the saying - when one door closes, another opens.

I believe the key to our success is of course the quality of our cookies first and foremost, the consistency of our products and services, the stamina and dedication to refine our craft, and the passion to keep bettering our products, systems, and ourselves day in and day out. We produce over 30 varieties of Cookies and Brownies and have established our Brand nationwide.

In 2012, Blondie’s Cookies had the opportunity to audition for a popular TV show on ABC: “Shark Tank”. Funny story - after about 4 months of different steps (submitting products, submitting a tape, mounds of legal documents, background checks, etc.), I received a phone call at 8pm while at the grocery store from an ABC executive who said we had been chosen to go to Sony Studios in L.A. and film for “Shark Tank”. I informed him I was standing in front of the bananas in the grocery and I needed a moment to process what he was saying. Very surreal indeed!

After getting assigned 2 coaches to guide and test me on my pitch for 2 months, we were flown out to L.A. where we auditioned again in front of a very large group of producers and executives for Disney, ABC, Sony, Finmax and Mark Burnett Productions. There were 86 of us, and we were narrowed down to 54 for the 9 episodes of season 3. The next morning, I gave our pitch to the wonderful Sharks on the 10th anniversary of 9/11. A month later, they called and said they were sending a film crew to film in our hometown of Kokomo. For the 9 episodes in season 3, 9 businesses were picked for what was called the hometown spotlight.

Although Blondie’s Cookies Inc. did not do a deal with the Sharks, the national exposure and contacts (and mentoring that took place following the show) was in itself a true blessing. When the Super Bowl was in Indy, Blondie’s did several thousand cookies for the VIP Party. We also did an event for the Food Network in Miami, the Emmy’s in 2013 and much more. Shark Tank also did a follow up on us via Skype in 2019.  And in 2013, we were voted the second favorite for season 3 in an online poll taken nationally by “Shark Tank”.

I love what I do and from a very young age, I’ve been blessed to know what that was. I say to all start ups, "Make the best product or service possible regardless of cost. Enjoy the journey and learn from the downs, and grow with the ups.  And thank all the people along the way that mentor and help you realize your dreams."